After a rally of around 900 points off the lows, $NIFTY scaled yet another mark to push through the current swing high of 8814.10 & made a fresh high of 8821.40. While the intraday volatility increased, McClellan Oscillator Cools Off while Nifty scales 4 Month Highs. Before we get into the details, let us have a look at the McClellan Oscillator, McClellan Summation & the Breadth Thrust chart to see how the upmove has shaped up and what can be the future move based on the internals. 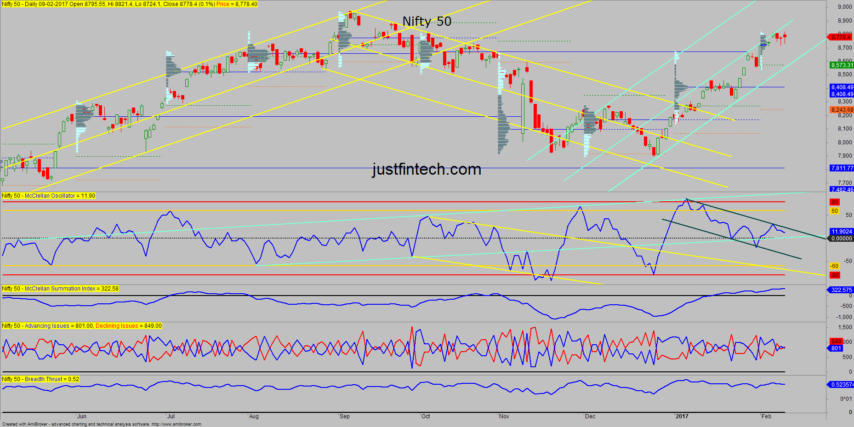 In the above chart, we can see that the $NIFTY is following a channelled move up and getting resisted at the upper channel. The McClellan Oscillator made a push into the 80 level which we had not seen in the earlier rally. The push confirmed the underlying strength as McClellan Oscillator is a calculation of market breadth & a vertical move up in the oscillator with the price still lagging will pull up the price higher. After making a high, $NIFTY started scaling new highs but the McClellan Oscillator started cooling off and currently following a channelled move down. There is a long term rising channel ( Cyan colour ) which offered support and a false break of that long term channel created momentum in price once the oscillator pushed up into the channel again. On the upside, the oscillator is facing resistance at the upper trendline of the falling channel while $NIFTY is facing resistance at the upper trend line of the rising channel.

The McClellan Summation Index is at the highest points in the last few months & if it can hold on to these levels, the McClellan Oscillator might cool off to complete the rotation down, while the $NIFTY might just see some profit booking and hold up in a pullback to keep the bullish trend intact.

The Breadth Thrust is what is a matter of concern and a bit disappointing for fresh longs in any further breakout. Breadth might cool off due to lack of momentum and to enter fresh longs we require a good risk to reward ratio where we can get a decent rally without the Index giving big dips. But as the breadth suggests, we are witnessing volatile moves with both the Buyers & sellers getting their chance to be profitable if the entries and exits are swift.

As we know that the oscillators might cool off before continuation moves, we cannot blindly jump to call a top, else the top would be in place when the McClellan Oscillator made a lower high when $NIFTYmade a high of 8641 but the divergences or indicator readings that are contrary to the trend need to be analysed with a pinch of salt else there a chance to get caught on the wrong foot. Had the $NIFTY fallen post 8641, talks of the McClellan Oscillator being the holy grail would be doing rounds but it does not happen when we want it to happen. We should look for a consistent weakness in breadth along with a weakness in closing price away from the open & high initially to conclude any reversal of the ongoing uptrend & till that is not visible, this can be a cool off before a continuation move or a move higher to blow off the weak sellers holding on due to various oscillators signalling a divergence.