Nifty McClellan Oscillator seems to be following a Channelled Move

We all know that the McClellan Oscillator is useful in determining the trend of the Stock Index based on the Advances and Declines computed with a formula. Recently we saw the Nifty 50 rising towards new 52 week highs and just few hundred points off the All time highs. While the Index was making newer highs, the Advances were dropping considerably. One can argue that we can see many Mid-caps and Small caps making all time highs then how come the Advances are slowing down.

Yes, we agree to that fact that many stocks are making all-time highs but the data suggests that while 20% are making all time highs, 50% are in sideways trading range since past few days after a huge run-up and the rest of them are in a corrective phase. We don’t know if it’s a temporary corrective phase or a deep correction is on its way. The McClellan is at least suggesting that it wants to stay within a channel after rising from the lows from first week of August 2016.

Let’s have a look at the McCllelan Oscillator Chart and see how it looks. 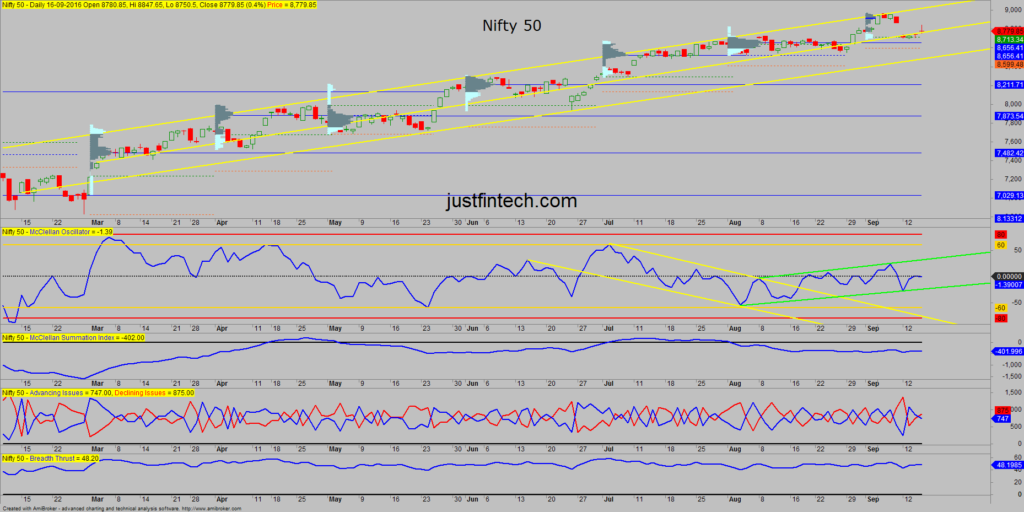 In the above chart, we can see that the $NIFTY got resisted at the long term upper channel and the McClellan Oscillator started its move in the rising channel. Oscillators tend to oscillate between the extreme points and form patterns along the move which can be useful to identify a potential trending move ahead. Here we can assume that as far as the median line holds and the McClellan Oscillator does not break down below the channel, the uptrend is intact. Once either of them leaves the channel due to time consumption, we will need to reevaluate the situation at that point in time.