When we learn various ways of trading Price action, most often than not, we can see that most traders refer ; If the Price is trading above previous day’s high, its a bullish sign and if it is trading below the previous day’s low, its a bearish sign and if the market has taken support at the previous day’s high, its a bullish sign and if it got resisted at the previous day’s high, its a bearish sign and the same thing goes on for previous week’s high and previous week’s low.. so on and so forth. As we progress we see the market does not follow those levels to the tick and build a perception that a static or variable filter should be applied to save the stop losses at those levels or we should keep the buy order / sell order, a few ticks above / below previous week’s high / low so that if the market goes 1 or 2 ticks above / below the previous week’s high / low and falls / rises back then we would not get trapped. The reason these references are breached and tend to fail is that the day time frame traders tend to trade around these references. Those are either the ones who want to take few points and relax or the ones who are not aware of the opposite intermediate or long term forces that are present in the markets. In this post, Market Profile – Weak Mechanical References , I would like to show some recent examples n Nifty futures where the Weak Mechanical or the Visual references were at play and how the auction behaved around those levels. 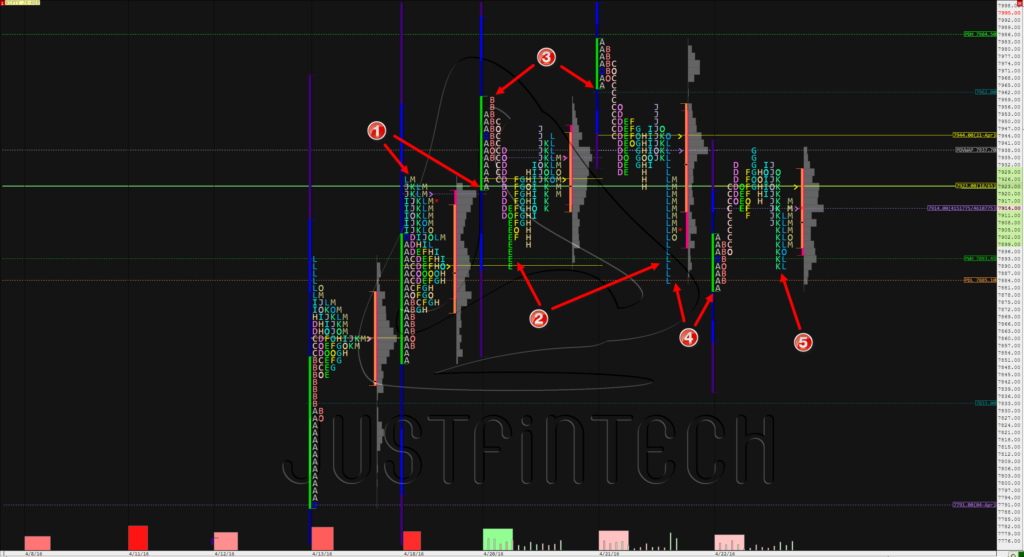 The Cyan colored dashed line represents Single Prints if any on the current day or from the previous days.

Lets see what happened in the above chart as per the marked numbers :

Hope the above explanation helps in determining the Market Profile – Weak Mechanical References and filtering the noise that usually surrounds around those levels. Many traders guessing why Nifty futures has become range bound is also due to these shorter time frame forces in play against each other and lack of longer time frame participation as the auction approaches a crucial longer term reference from where it started selling off in January 2016. In hindsight everything looks bright and shiny when freshers start trading Market Profile with the Value Area, but its not just about buy above or sell below the Value Area ; Market Profile is a vast subject and lot of nuances that need to be kept handy. Having said this, everything finally boils down to your own nature and time frame of trading and a daily profile by default is on 30 minute brackets.

To conclude this post, I would like to stress that do not change the way you trade just by understanding the weak references but do note them down, observe what happens in next few brackets and above all never forget the longer term context. There were many other references related to Value Area and Micro Balances in play as well in the above chart but I have pointed out the weaker references to let everyone understand one thing at a time.

The above charts are for educational & reference purpose only. Trading in derivatives has high risk involved and not suitable for all investors. The above levels are not a recommendation/offer to buy or sell any or all of the above derivatives. Any person trading or making buying or selling decisions on the basis of the above mentioned levels should do so at their own risk. Justfintech.com / its affiliates / staff will not be responsible for any profits and/or losses arising from the trades executed on the basis of the above levels. It is advisable to consult your personal financial adviser/consultant before entering into a trade. The usage of the charts is subject to Terms of Use, Risk Disclosure / Disclaimer and Privacy Policy of Justfintech.com