When it comes to trading Market Generated Information , the VPOC – Volume Point of Control plays an important role in determining the price where highest volume was generated within the 1 standard distribution of the Volume across all prices of a trading day. Before starting with the VPOC – Volume Point of Control – Statistics – Nifty Futures,  let me first post a chart to differentiate between a VPOC and a TPO based POC. 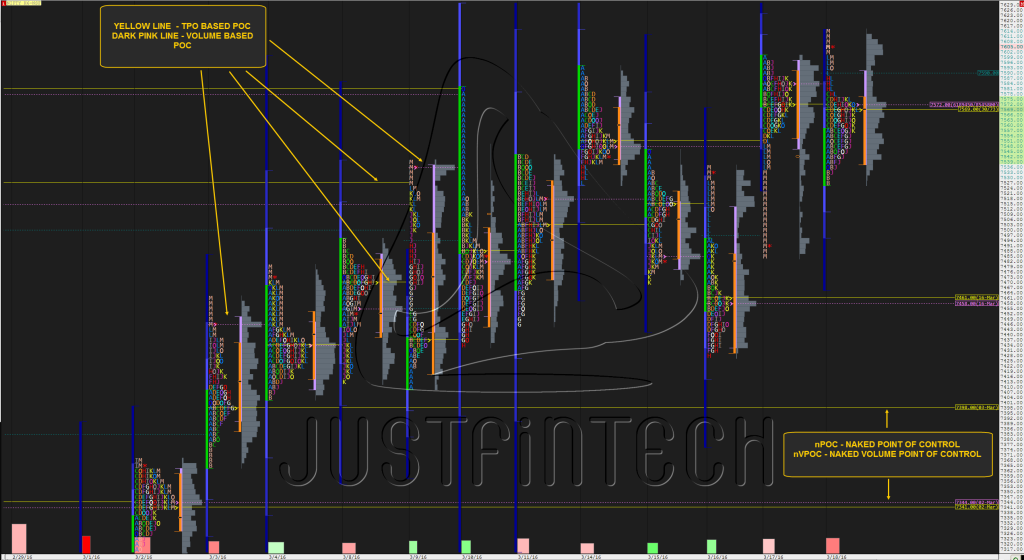 Its very important to understand the difference between the VPOC and POC As both are calculated as the Point of Control within 1 standard distribution in a given time frame but the 1st is based on Volume distribution and the later based on TPO distribution. Many call the TPO based Virgin Point of Control also as VPOC and many call it as nPOC or the Naked Point of Control nPOC. previous day’s VPOC can be called the yVPOC and the the previous day’s POC as yPOC. But, time being let’s not get into the terminology part, as whatever we call it, as far as we know what it means it’s all fair and good. Volume can be interpreted in many different ways and VSA – Volume Spread Analysis is also one way of looking at volume and Volume Profile is another way of looking at the volume. 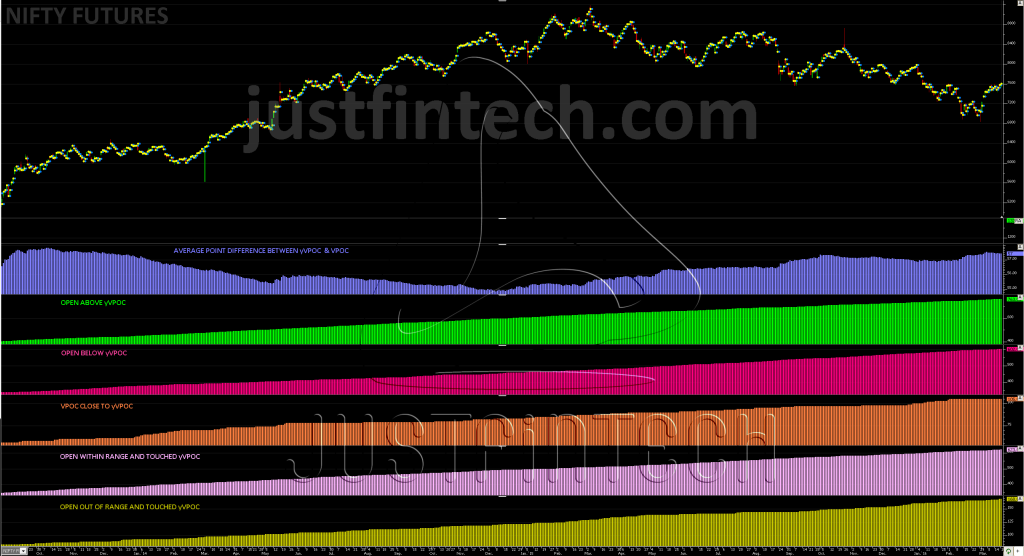 The Nifty Futures chart above is for 1375 days ending 18-03-2016 with the backtest results in the lower panes.

So basically at present if someone is trading for a touch of the previous day VPOC, there is a fair chance to lose/gain 57 points till we get a new reference of the VPOC of the current day.

So odds in carrying overnight positions are in favor of anticipating an open above VPOC.

The fifth Pane in Orange shows how many days was the Developing VPOC closer to the Previous days VPOC and we can see that out of the 1375 days its was closer to the previous days POC for 105 days or in percentage terms it was closer 7.64% of times which is again a sign of a trending asset class.

Open within Range and touched yVPOC

Open out of Range and touched yVPOC

So overall, we can conclude that Nifty is in a trending mode most of the times and the odds of getting beaten against the trend increase if we are carrying overnight positions without proper hedging.

The above charts are for educational & reference purpose only. Trading in derivatives has high risk involved and not suitable for all investors. The above levels are not a recommendation/offer to buy or sell any or all of the above derivatives. Any person trading or making buying or selling decisions on the basis of the above-mentioned levels should do so at their own risk. Justfintech.com / its affiliates / staff will not be responsible for any profits and/or losses arising from the trades executed on the basis of the above levels. It is advisable to consult your personal financial adviser/consultant before entering into a trade. The usage of the charts is subject to Terms of Use, Risk Disclosure / Disclaimer and Privacy Policy of Justfintech.com