Markets In Profile 2015 – How Nifty, Bank Nifty and other Sector Indices performed during the year 2015

As we bid good bye to 2015, we would like to review how the Indian indices performed during the year 2015. The year started with the Indian CNX Nifty 50 index opening at 8272.8 and hitting Lifetime Highs of 9119.2 on 4th March 2015 backed by the expectations from the Budget 2015 and huge FII inflows during the initial months. The Index never saw the 9000 mark during the entire year after that date and went on hitting lower levels during the year. The worst ever fall came on the 24th August 2015 followed by the China news when the Index opened huge gap down and post that fall, on 23rd October 2015 it tried to move into the gap zone left behind but was not able to sustain the highs and the gap still remains unfilled. We had a fresh high in Nifty futures on that day and the index started sliding back down towards the lows of September 2015. On 14th December, Index managed to just stay off the lows and started its upmove again and finally closed 2015 at 7946.35 almost 4% down from the open of the year. Going into 2016, that gap will act as a stiff resistance and almost a dividing line between the upper & lower balance if we look at it in long term Market Profile terms.

Lets have a look at the India Vix based volatility and how the Nifty and Bank Nifty moved in comparison to the VIX.

When we have a look at the NSE sector Indices, Media Index outperformed the rest, gaining 10% from the open of the year and Pharma and Consumption Index staying 2nd and 3rd, gaining 9 and 8% respectively. PSU Bank and Metal Index were the worst performers during the year, losing 31-33% from the open of the year. Bank Nifty, under pressure from the PSU Banks, lost almost close to 10% during the year and next was the Infra Index, losing approx 9%. Rest of the Sectoral Indices stayed within +/- 6% range. The following chart shows the NSE Sector Indices relative strength during the year 2015. 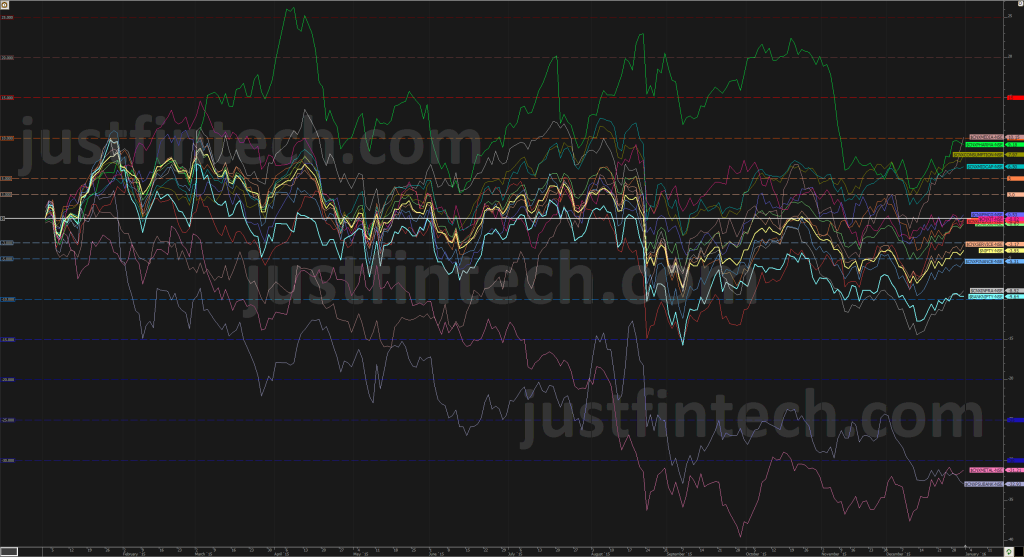 Coming back to Market Profile, lets have a look at the Month Composite Market Profile Charts of Nifty and Bank Nifty Futures to see what they did during the year 2015 and what can we expect in a broader context, going into 2016. 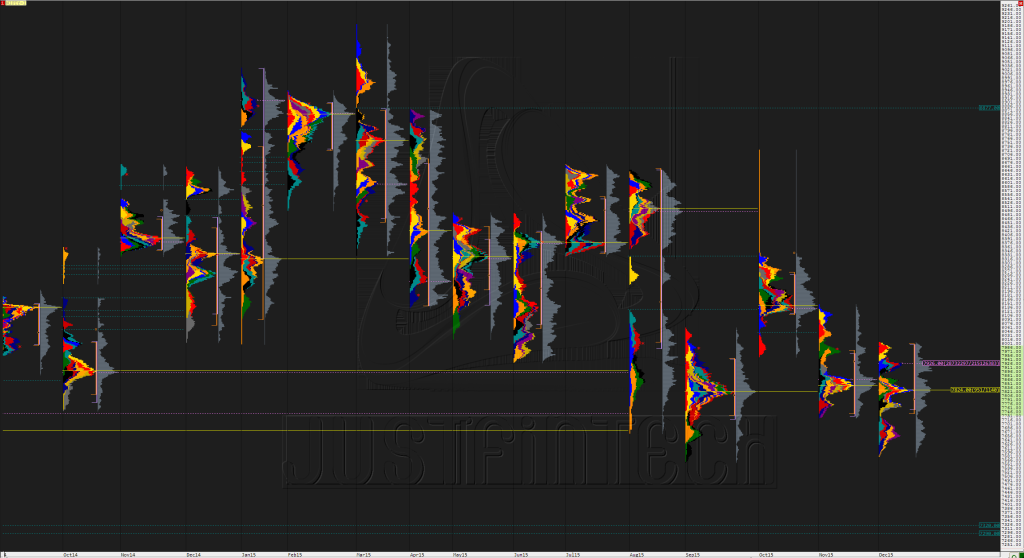 As we can see in the above chart, January 2015 started with the Nifty Futures trending up above the 2014 highs and later in February it showed acceptance of those prices with huge FII inflows. It rallied on 4th March to make a new lifetime high, leaving behind a huge excess and in a weeks time it was trading below the fair price of February 2015 which was never captured again during the entire year. It went on lower till June 2015, from where it rallied back again towards 8650, establishing value between 8350-8550 but got sold off heavily in Sep 2015, to hit a new low for the year 2015. We saw a freak high on 4th October and again the attempt to trade above the upper value failed and it fell back towards the lows and finally settled above 7900 for the year. We can see an even distribution in Sep 2015 but overall, the year was divided into two larger balances, above the gap of 24th August and below the gap of 24th August 2015. Going into 2016, if it manages to stay above the highest accepted price of the lower balance at 7820-7870 then we can see it pushing towards 8100 and later trying to probe into the 8350 zone and move higher if gets accepted at higher prices. A failure to hold the lower balance POC would now mean a danger of even pushing down below the lows of 2015 and that possibility also cannot be ignored. 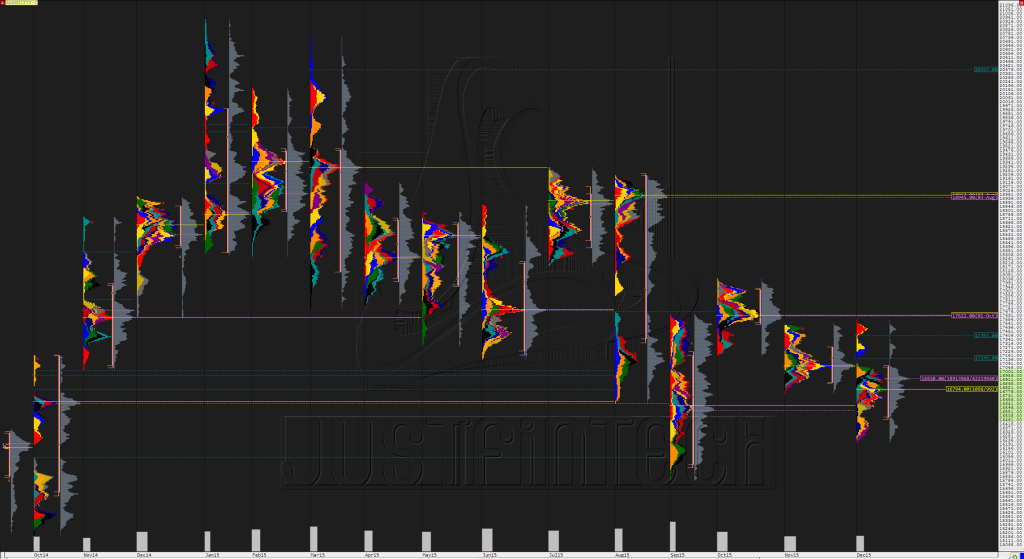 Bank Nifty Futures did almost same like Nifty Futures, rallying above the 2014 highs in Jan 2015 with a scattered participation and later establishing value in February, just above the January highs. The attempt to cross the January highs did not succeed in March 2015 and we saw the Index accepting  the lower prices. Attempt to go above the fair price of Feb and March again failed in July 2015 and we saw it breaking the lows and probing the Sep 2014 fair value from where the rally had started. Bank Nifty futures finally closed just below the 17000 mark to end 2015. Going forward into 2016, there is overhead resistance near 17600 zone which has to be accepted to move higher towards 18000 and above levels. Failure to hold on to 16400 odd levels can make it more weak and run  into the danger of breaking the 2015 lows.

The above levels are just a reference of the broader context and we cannot predict year long moves with the help of just one chart and will take it further as the auction develops.

Coming to personal front, 2015 gave a good start and it was a fruitful trade to assess the excess at highs and create shorts below 9050 levels. In March 2015, met few great traders and was invited to speak at a traders’ conference in May 2015. Things were going smoothly until 27th April 2015 morning when i was shocked by the sudden demise of my Mom but living upto the expectations is a tough job and I am happy that i made it to the Traders’ Carnival between May 1 to 3 2015. Later during the year, got a chance to speak for ATMA at the 55th Chapter Meeting at Mumbai and have been doing efforts to pull out as much as I can. With everyone’s support and wishes, I will try my best in 2016 to continue with what i have been doing and last but not the least, the resolution for the year 2016.

To improve further in entries and exits based on the micro composite profiles and most importantly to develop a mechanical approach, leaving aside the noise of News and stuff. To remind myself that there are much better traders out there and wish to be one of them some day.

Wishing everyone a Healthier and Profitable year 2016.

The above charts are for educational & reference purpose only. Trading in derivatives has high risk involved and not suitable for all investors. The above levels are not a recommendation/offer to buy or sell any or all of the above derivatives. Any person trading or making buying or selling decisions on the basis of the above mentioned levels should do so at their own risk. Justfintech.com / its affiliates / staff will not be responsible for any profits and/or losses arising from the trades executed on the basis of the above levels. It is advisable to consult your personal financial adviser/consultant before entering into a trade. The usage of the charts is subject to Terms of Use, Risk Disclosure / Disclaimer and Privacy Policy of Justfintech.com